This day was notable because Monte had his own wipeout! We were biking along at a good clip on a gentle downhill. The trailer hit a little pothole in the road and the next thing I see biking behind Jake is Monte hanging out the back of the trailer! He was dangling by his harness which is attached to the bottom of the trailer by a short leash. It was up by his neck and his front legs were up off the ground and rear legs were dragging along the road. I screamed bloody murder. Jake was already stopping. We have no idea what happened. He either jumped out or he was bumped out by the pothole. He had some road rash on the tops of his back paws. We cleaned it and bandaged it up and as soon as we set him down with his new bandages he proceeded to pull them off. Why did we think he would keep bandages on his paws? A cop stopped to see what we were up to and if we needed any help. He let us replenish our first aid kit with his. He also told us, by way of making me feel better, that he had a wolf dog tied down in the back of his truck and she jumped out and was dragged 150′ down the road. “She eventually recovered,” he said. Monte has indeed already made a full recovery from this incident. 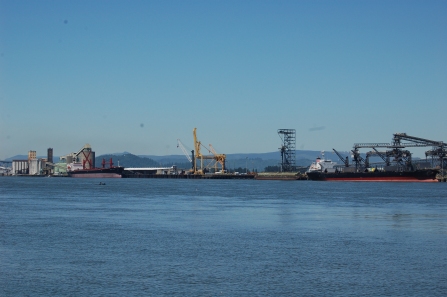 The view from the Marina in Rainer

Horses on the River

Lunch spot at a park in Castle Rock

We don’t have pictures of this but it was cool! We were biking along after leaving the town of Toledo where we got burgers and fries at “the best burger place in Lewis County” as we were told. I spotted three little kittens in the gutter running toward me! They were long haired and two were mostly gray and one was a little more brown and they were all completely adorable. I stop and put up my kickstand. I had the trailer with Monte behind me and the kittens stopped too and were just meowing. As I made a move to go reach for them Monte started barking incredibly angrily. So for fear of scaring them away I walked my bike up the road and Jake waited with them. We yelled down the road at each other as we discussed what to do. I started to approach a house by the road, but there were tons of no trespassing signs and a dog was guarding from inside the fence and barked at us when we came too close. We had no cell service to call anyone. We decided to flag down a car. I crossed the street and gathered some courage to flag down a stranger in this scarcely populated area. I let a couple of cars go by as I gather the nerve. One driver even waved at me! They would have been a friendly person to talk to! So I see that a big pickup has a driver and a passenger and I go for it.

It was a couple, a man and a woman. And they stop and I explain that the situation. They pull over to the curb and walk over to Jake and the kittens. The man has a cowboy hat, cowboy boots with jeans, no shirt, tattoos on his arms chest and back, and is pretty strong and trim. Oh and he has a handgun on his hip! The woman was not as startling to me. She had a baseball cap on and seemed nice. This guy immediately picks up two of the kittens holds them gently in his arms. I wish I had a picture. The woman grab the other one and says, “Aw, I might need to just keep you!” The man says, “Well, the shelter is closed today so I guess we’ll just take them home.” So he walked over to the truck with the kittens in his arms and they turn around and drive away! Tada! We helped save some kitties!

View of the steep climb ahead

Monte relaxing while we wait on our sandwiches

Centralia was founded by a former enslaved person named George Washington. I was not expecting to read about such an interesting town history up here.

Elma RV Park had the friendliest staff and campers of any place on this stretch. The owners live in an RV and are cyclists so they had a great rate and setup for us. $5 with firewood included! They gave us freshly baked chocolate chip cookies. 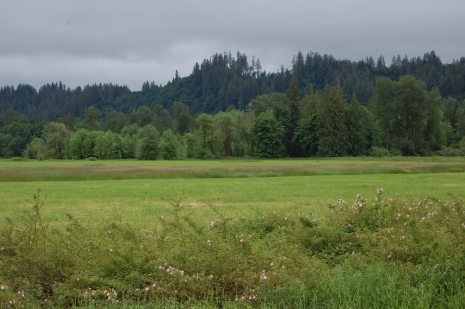 The most notable vista of the day

View from our campsite

View from our campsite

The view between the RVs at Elma 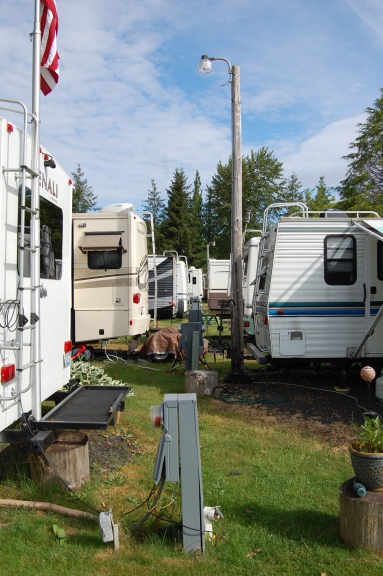 Creepy shoes left on a gate at another private undeveloped road

Monte stradling my leg to rest 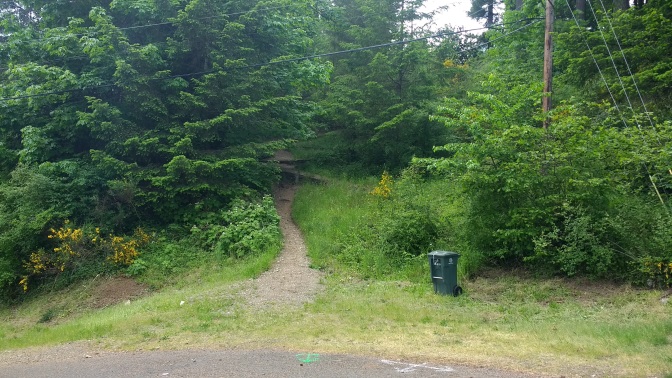 Google maps suggested we bike up this path in Shelton…