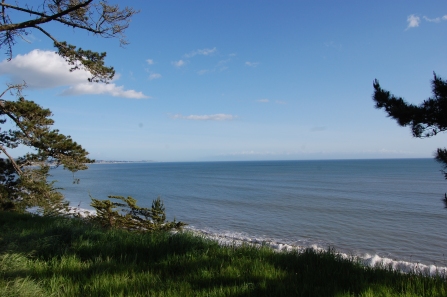 New Brighton Campsite at the edge due to flooding

We had planned on staying at a campground north of Santa Cruz, but luckily just before we pushed off a couple walking their dogs told us that it wasn’t a year round campground. And indeed it was closed until April 1st. Jake found a generous host on Warmshowers.org who could take us at the last minute.  We used the extra time to get ice cream and a deep cleaning of our chain at a bike shop. Our accomodation was so lovely. We slept in the a loft in a detached office in their backyard. Monte got to play with their dog and sniff all around the beautiful backyard, which was sanctuary-like. 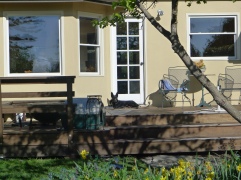 We didn’t know until we awoke where we were biking to exactly. We couldn’t find a place to stay and had some tips of where to ask for permission to camp.  Generally bike tourists go directly between Santa Cruz and Half Moon Bay because there aren’t very many places to stay in between, but the mileage, our weight and the gnarly headwinds combined would make that way too difficult a ride for us. The private campgrounds in this stretch did not allow dogs. A campground 10 miles off the route was closed until April 1. The few bed and breakfasts and the one hostel did not allow dogs. Eric and Trisha and a guy at the bike shop gave us some ideas of where to ask to camp and where to try to “free camp” illegally. We didn’t have to resort to that. Luckily, a generous person on Warmshowers allowed us to stay at his yurt even though he and his partner were away on vacation!

This place was off the grid and didn’t have a driveway–just a ⅓ miles trek over a 300’ elevation along Jeep tracks to get to the Yurt. We left our bikes at the bottom and hiked our stuff up. The yurt was so cool. We fired up the generator to cook dinner and took showers in the outdoor gas heated shower. The toilet was a bucket with a toilet seat attached and some wood chips inside, in case you are curious.

View from the bike 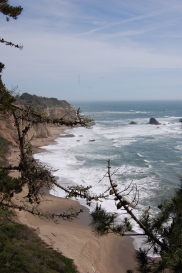 Hike to the yurt

This day was sooo windy. My friends David and Alex drove over from Palo Alto to have dinner with us. Monte was happy to be left to nap in the warm car while we were inside. We’ve had really bad luck with raccoons… The hike bike camping area is under two trees where raccoons LIVE! We walked away from the campsite just for a second to go to the bathroom and when we returned there were two raccoons munching on Monte’s food. Monte’s raccoon ignorance was shattered and he learned that they are not good guys after I yelled and shook a stick at them. He nervously ate his food off the ground while the raccoons lurked in the tree waiting for their opportunity to follow up. Monte was a nervous wreck all night. Now he knows their scent now and when they stirred he awoke several times throughout the night to nervously pace the tent. 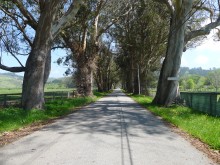 View from the bike 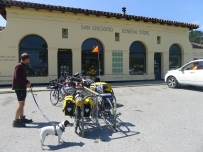 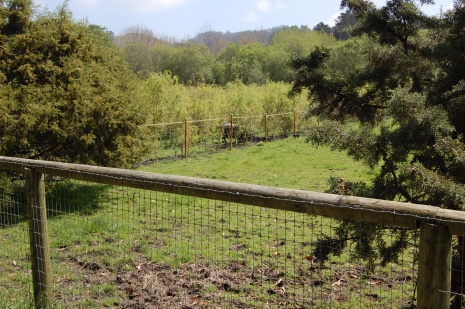 Horses checking us out

We sucked it up and got a motel so we could try to get out of the headwinds and get away from the raccoons as quickly as possible and have a nice shorter day into San Francisco. Jake and I had actually stayed at another hotel just across the street a year ago on a road trip, so it was nice to be in a familiar place. 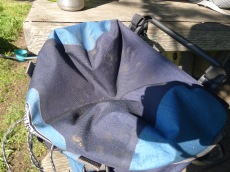 Evidence of the raccoon 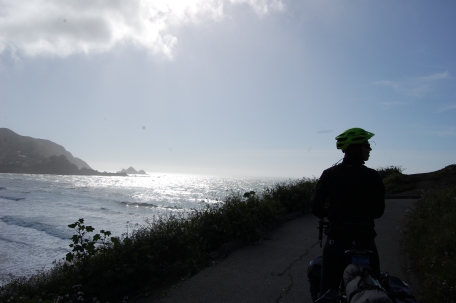