We hung out in the yurt until the rain subsided and took the opportunity to go for a short hike before checking out at 1pm. We had been staying near dunes, but this was our first opportunity to really explore them on foot. We’ve been surprised by all the dunes and lakes dotting the coast of Oregon, which in our minds is known to be rocky.

We reached Florence, OR for lunch, and the rain and wind had started again. So, we decided to stay nearby at the Lighthouse Inn. The town was quite quaint with a riverfront walk with restaurants and shops. We had an excellent dinner at Siuslaw Riverfront Eat and Drink while Monte chilled in the motel room. I was impressed with the fact that they had a Petersen Western Birds Field Guide out on our table which overlooked the river as well as a beginning birding book for children.

We stayed in a yurt! 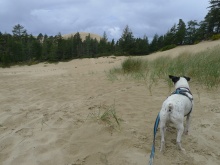 Monte taking in the views of the dunes. 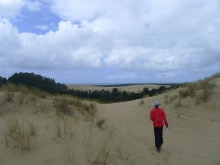 Textures of the forest… 1 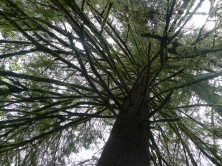 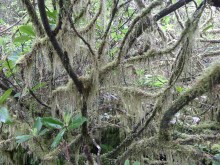 We spent the morning doing some needed shopping for food and pet supplies. We stopped for a prolonged lunch at the beautiful Heceta Head State Park, which features a beautiful cove with a beach and trail up to an old lighthouse. Monte had a blast romping through the tide pools.

The winds really picked up in the afternoon, and we turned into Rock Creek Campground. It was a little unassuming place, which was a pleasant change from some of the massive campgrounds we had stayed at recently. We had our pick of sites but chose the farthest one back to avoid the winds. It was beautifully situated on a rushing creek with a small hiking trail and no neighboring sites. The hosts were really kind, but thought we were crazy for even being outside because it was so cold and windy. They had just moved from Quartzite, AZ, where it frequently is over 100 degrees. It seems like they have some adjusting to do. 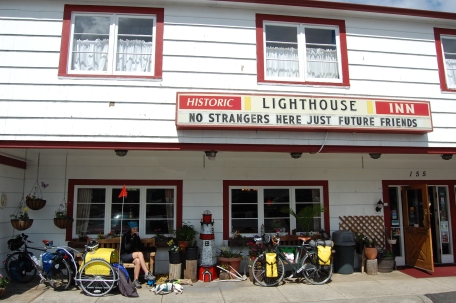 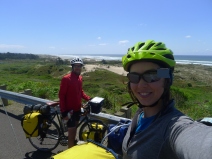 Last sightings of the dunes

Airplane ears! He gets these in the trailer when we are cruising down a hill

What a handsome guy

Monte is staring down a crow, his sworn enemy

It was a beautiful day for riding by Oregon standards that took us through some coastal towns with amazing views and across yet another big bridge. We passed a grocery store at lunch expecting more in the afternoon, but we either missed them or they don’t exist. Planning for groceries every day and taking time at the store has proven to be much more frustrating and time consuming than expected. We stopped at an RV Park to inquire about camping, but it was nearly $50 for a tent site on the lawn. Also, the on site store was closed. It was an odd place that felt like a country club for RV campers. We were encouraged to go to South Beach State Park, which was only a few more miles, and we were told there was a convenience store and fish market/restaurant just before the entrance. Well, we saw no store. It turned out to be 3/4 mile past, and we enjoyed some yummy fried seafood and a beer. The campground was also really nice. A jetty that was constructed in the late 19th century created the beach that the park is now situated on. 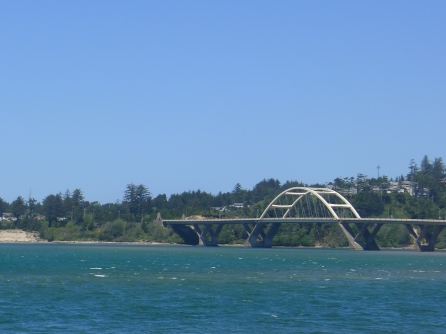 Bridge in Waldport, OR 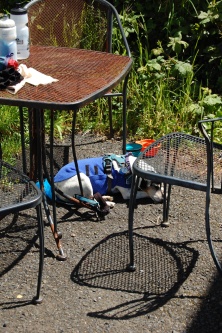 Monte napping at lunch. He is getting good at relaxing in public.

Dinner stop. Notice the UFO on the roof.

We stopped for more errands in Newport and consulted the bike shop for advice on getting to Portland. We encountered another solo bike tourist heading North outside the Mini Pet Mart, a place that curiously stocks pet supplies and bulk cigarette boxes! We told him about Beverly Beach campground. He was 72 years old and from the Netherlands, and his English was limited. We ended up camping next to him, and he told us all about the trip he has been on and recommended biking through France, Belgium and the Netherlands. He had just spent 9 weeks biking New Zealand and now is headed from Los Angeles to Jasper in Canada. He also gave us some tips on chain maintenance that will save us a lot of time and hassle.  He also adjusted Morgan’s brakes. Overall, he was the most impressive guy we’ve met so far.

Our site had a huge lawn space away from other campers, so Monte could run and play with his new toy that he picked out at the pet mart.

We made it down to the beach just in time for the sunset. It was perhaps the most beautiful sunset we’d seen in Oregon or the whole trip even, but we have no pictures. We left our cameras and my phone has been doing this thing where it shuts down when I open the camera app. So, you’ll just have to trust us that it was gorgeous and you missed out. 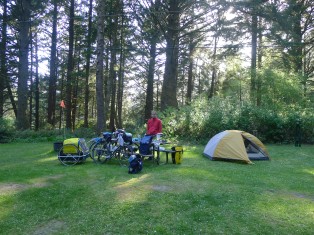 I found a flea on Monte. It was probably dying since I caught it and killed it so easily, but it was time to renew his flea and tick medication, as well as his thyroid medication. I located a vet on our route, contacted our vet in L.A. and had the prescription filled and ready to go. Easy as pie thanks to LTE cell service, which we have so seldom had in Oregon until now. Well, we arrived at the location of the vet as mapped on Google, and all that was there were some antique shops and a book store. And of course cell coverage was nowhere to be found at this particular moment. It turned out the vet was a few miles off the route in town, and we finally made it. Monte was skeptical of the vet as usual, but the people were really nice and helpful.

We camped at Devil’s Lake in Lincoln City and enjoyed some of the sunniest and warmest weather yet in Oregon. We soaked it in because we knew it was not going to last. Rain was predicted for the next five days with highs in the 50s… 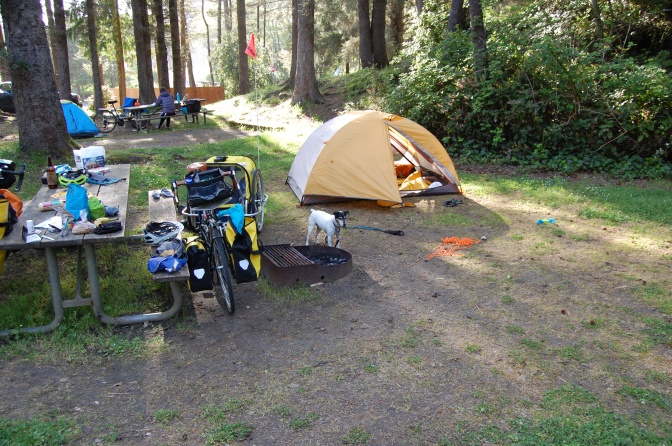 Monte awoke to a sunny campsite, which he clearly took advantage of, napping while we packed everything up. We made an unusual stop at the outlet mall to get Morgan a warmer coat, as we finally submitted to the fact that this spring is just cold and it is not ending anytime soon. Also, she was jealous of Monte’s new coat, which upgraded him from “chilly billy” status to “toasty nugget.” hose are two nicknames we’ve been using for him quite a bit on this trip.

The ride to Cape Kiwanda was beautiful. We spent 10 miles on the scenic old 101 highway, which wound its way over a hill through the forest. We had ocean views, river views, bay views, and all manner of views.

Riding on the old 101 highway 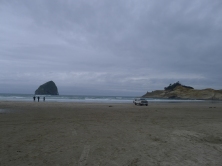 A storm kept us up in the night and there was more rain and wind in the forecast. We decided to rest, which meant a lot of time in the tent. 🙂 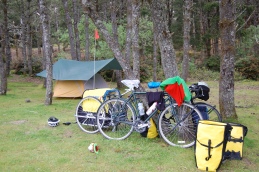 Lots of time in the tent

Even more time in the tent

There was a break in the weather in the morning, and rested up, we departed for Tillamook. We hit some cold, hard rain in the afternoon that basically crippled us. We had to go for the motel option. Morgan’s teeth were chattering. Our hands were freezing. Morgan was checking out at Safeway and accidentally touched the cashier’s hand while taking the receipt. Shocked, the cashier withdrew her had to her chest in a fist and exclaimed, “Oh my! Your hands are like ice!” Luckily we got into the motel and a hot shower pretty quickly and there was a good Mexican restaurant across the street.

Ready for the rain and the climb 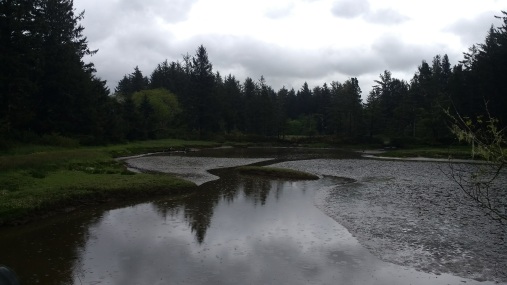 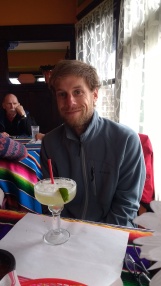 Margaritas after thawing out at the Western Royal Inn